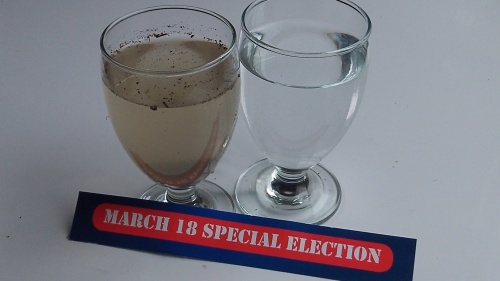 Significant new discoveries and research should finally bring clarity to the confusion surrounding the scheduled March 18 special election in York County to fill the unexpired term of Senator Mike Waugh in the 28th district.  Allegations of significant disenfranchisement of some and improper enfranchisement of others become more certain by examination of new evidence, making any reasonable defense of this election’s validity impossible.

The story of probable disenfranchisement first broke with an article published both at the blog FreeMktMonkey.com and WatchdogWire-Pennsylvania on March 3.  While the first article got some notice and sparked some interest, it was a subsequent follow-up article published March 9, that provoked daily discussion and debate on the Gary Sutton Show, a local call-in talk radio format airing 9am-Noon Monday through Friday on York based WSBA 910.

At my suggestion, following a call to their newsroom, the York Dispatch published their own article on March 13.  Unfortunately the York Dispatch article only heightened the confusion, which further fueled talk show interest and prompted my search and discovery of additional evidence that will shortly make the issue more clear.

Further confusion injected by the York Dispatch article was not the fault of its writer, Christina Kauffman, in that she had no reason to distrust her sources.  They were the experts, assumed to know what they were talking about.  Yet digging deeper suggests her sources were presenting incorrect assumptions rather than facts.

It is Mr Ruman who was quoted as saying, “…technically the new maps take effect when they are approved.”  Also attributed to Mr Ruman was that “the old representatives and senators will continue to help their former constituents until November 30, when the session ends (required by the Constitution in even numbered years, as new terms begin Dec 1, even though the newly elected are not sworn in until the first Tuesday in January)”.  Ruman asserts that citizens who will move into new districts immediately became “former constituents” of their current elected representatives as of the May 8, 2013 Supreme Court approval of new redistricting boundaries, on which this election is being based.  Why should we doubt the “expert”?

Enter the evidence: First, in the just referenced article on the court approval, upholding the new redistricting plan, it was ordered “…to be used for the next round of legislative elections in 2014”.  There was no suggestion of immediate implementation as to representation.

Then this important clue: A search found there had been another special election subsequent to the May 2013 delayed redistricting approval.

On September 6, 2013, well after the court’s action, 78th House District Representative Dick Hess died in his 14th term.  Following the election code, presiding officer, Speaker of the House, Sam Smith, issued a writ for a special election within the required 10 days, on September 16, 2013.  A special election to fill the vacant house seat was scheduled and held on January 28, 2014.  Jesse Topper, the Republican candidate selected by committee members from the counties involved won the election, was sworn in Feb 10, and now represents the 78th district in the house until the end of Rep Hess’s unexpired term ending this year.

Significantly, Topper’s January 28 special election presented no enfranchisement issues, currently contributing so much confusion and consternation in the Senate 28th District, because it was conducted on the existing (old) district boundaries!  Articles at the time reported this fact, also confirmed by pulling up election results from Huntingdon County.  The six precincts reported in the vote will all be leaving the 78th to the 81st in the new session to be decided in the May primary and November general elections.

So we have two special elections.  One was set up one way, the other, a different way.  Both cannot be right.  Even in the absence of any specific direction in the election code, which may be the case, the basic concept of tying voting to voters actually represented and commonsense should prevail.

Another piece of guiding evidence exists.  Whether it’s the newly elected Jesse Topper in the 78th House District, or any other current member of the Pennsylvania General Assembly, a visit to members’ pages on the General Assembly website still shows only the old district maps as the areas they represent.

Press Secretary Ron Ruman’s confusion appears to be in when the newly approved district boundaries apply.  It makes sense, and evidence supports, that upon official acceptance redistricting maps immediately define future district boundaries to be filled in the next round of primary and general elections, not special elections to fill existing terms, where the area of representation has not yet changed.

At this point, clarity should be restored with one exception, what voting precincts to include if the March 18 senate special election were for a senate term expiring 2016 rather than 2014 (half of them do), as discussed in an update to my March 10 article.  That is a situation unique solely to state senate elections and redistricting, since federal senators always represent the entire state and both the state and federal house are on the same two year cycle.  As such, it also should be addressed in needed clarification to our state election code.

A call Thursday to Nikki Suchanic, confirmed the writ issued by Lt Governor Jim Cawley, detailed the precincts to be included in Tuesday’s special election and that her job is to follow the writ.

A call to the Department of State directed me to media contact Matthew Keillor’s voice mail, who never returned my call.

A Friday afternoon call to Lt Governor Cawley’s office, relating my findings was acknowledged by contact Todd Kowalski as raising very good points worthy of legal review.  Mr Kowalski took my email address, but I’ve heard nothing back as of this time.

As a final note, with evidence so strongly suggesting an improperly configured special election March 18th, those feeling disenfranchised may want to cast a provisional ballot at the nearest open polling location.  For complete instructions follow this link and open the tab “Provisional Voting”.