Can Obamacare’s “Barrycades” to Insurance Freedom be Crossed? 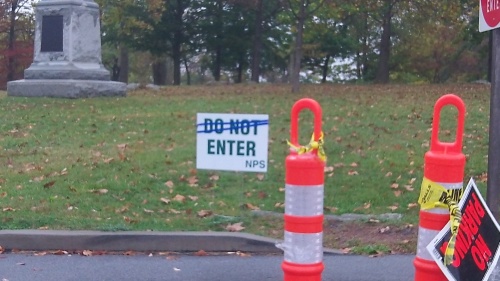 Not so unlike the fences, signs and traffic cones used to unnecessarily block Americans from their open space national treasures during the recent Federal Government shutdown, similar “Barrycades” to healthcare and insurance freedom are limiting Americans’ ability to freely enter into contracts on terms they decide are right for them.  As the millions having their health insurance policies cancelled are learning, there is currently not an option to simply pay the tax, if necessary, and even forgo the subsidy for those willing, in order to keep a health insurance policy they may have owned for years.

While the freedom to contract, as provided in Article 1, Section 10 of the United States Constitution may seem clear to many, who likely consider it one of our foundational rights, it has endured a surprisingly rocky history in our courts, and as such, provides no guarantee of support against the impositions of the Affordable Care Act.  In America today, Obamacare is erecting barriers to contract freedom by attempting to restrict terms of health insurance policies to those dictated by powerful government bureaucrats, in total disregard of individual choice or basic considerations of sound personal finance.

Especially hard to understand is that a tax can be paid to legally remain completely uninsured, yet plans not deemed “qualified” are not supported as better than nothing (and in many cases completely adequate) in relieving others of ever having to pick up for those without the resources to fend for themselves.  Wasn’t that the stated goal all along?  Like so much of Obamacare, this makes no sense and can only be about elitist control, a step into socialism Americans used to think only happened elsewhere.

Also, with a growing healthcare freedom movement by doctors to eliminate third party payers entirely, from at least primary care, by the establishment of direct pay cash-only pay-per-use or concierge practice models, other options will be needed for those who choose this interesting, and so far, legal alternative.  The use of still available critical illness insurance, as a proxy for unavailable pure high deductible insurance that would make much more sense in these situations, has been suggested.  Dr. Merrill Matthews, of the Institute for Policy Innovation, in a recent article in Forbes, shows how being wrapped in a cloak of life insurance has allowed the critical illness insurance option to survive, and may be a good choice, if not ideal, for many.

As I wrote in a post last December, the curious Miscellaneous Provisions, Subtitle G, Section 1555 single paragraph in the Affordable Care Act clearly says that issuers of health insurance are not required to participate under the act, nor can fines or penalties be imposed for choosing to not participate.  When this is combined with the option for states to regulate insurance, as has been tradition under authority of the McCarran-Ferguson Act of 1945, questions arise as to what states may still be able to do.

Even under Obamacare currently, states may add to the essential minimum benefit requirements of insurance needed to “qualify”.  So states are still involved in their health insurance regulation, if only to a much reduced degree.  A question is how far that authority goes the other way.  Could a state right now, in answer to the current mess of cancellations along with a failed exchange website, exploit the crisis to require the suspension and reversal of all policy cancellations within its borders until the exchanges are fixed?  Could they allow and even require companies that want to sell health insurance in their state to offer the choice of non qualifying plans along side or in place of (Section 1555) Obamacare compliant plans, sold off the exchange, now and in the future?  Could states take charge of the situation to the point that, if Obamacare cannot be eliminated, there could remain legal alternative insurance options apart from Obamacare, even if the federal tax would be due and subsidies not available?

Senator Ron Johnson of Wisconsin has made an attempt to settle this question at the Federal level, at least for currently existing plans, with the introduction of what he calls the “If You Like Your Health Plan, You Can Keep it Act“.  Current political reality makes actual passage unlikely, of course, returning to the possibility that states could act on their own.

One of those I respect most in the Obamacare debate, Michael F Cannon, at Cato Institute, told me the Supremacy Clause would make my suggested state actions illegal, however one of the attorneys on a panel event I attended at Cato was less dismissive of my suggestion of what states could possibly do.  Adding further speculation is the answer I got from ehealthinsurance.com when I questioned them about a month ago.  Their first contact representative, told me they expect to see some states “go rogue” and attempt to offer non Obamacare compliant choices in the future.

As with the shutdown “Barrycades”, when free citizens defiantly crossed the lines and prevailed, will there arise states that tell the Federal Government they have gone too far and we the people have had enough?

2 responses to “Can Obamacare’s “Barrycades” to Insurance Freedom be Crossed?”